One of the most intriguing and rich in history Italian cities is Syracuse in Sicily.

Sicily hides truly mythical places. Places that combine history, legend and famous people, just like: the Ear of Dionysus. It is an artificial cave, also known as the Ear of Dionysius, in the ancient stone quarry called latomia del Paradiso, just below the Greek Theater of Syracuse.

It is an artificial cave, 65 meters deep by about 23 meters high, and 5 to 11 meters wide. It has a singular shape: from the front it appears like an inverted funnel, and it presents itself with a strange sinuosity that evokes an auricle.

Its particular “S” shape makes it a place for acoustic amplification of sounds. This trend derives from the presence of an ancient aqueduct in the upper part of the cave. From that track, the builders dug down, giving life to the present shape. But why is it called Ear of Dionysus and what was it for? Why is the great Caravaggio also involved in this story? 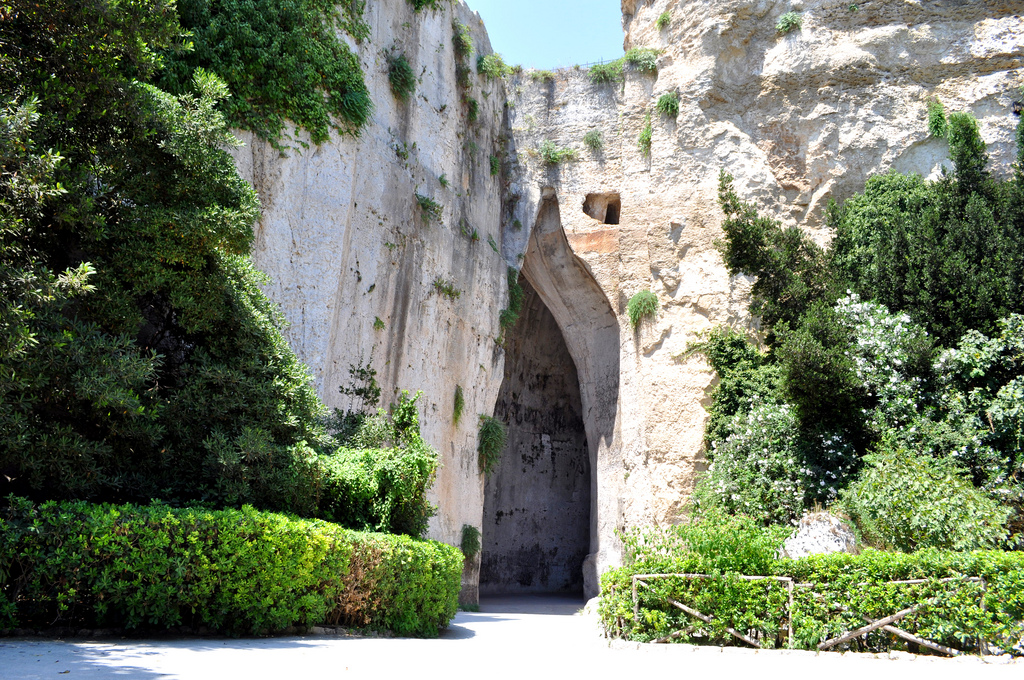 Why is it called the Ear of Dionysus?

According to legend, its particular donkey’s ear shape gave the painter Caravaggio an inspiration to come up with the name Ear of Dionysius. (Caravaggio had gone to the city in 1608, in the company of the Syracusan historian Vincenzo Mirabella).

According to tradition, the tyrant Dionysus had the cave excavated where he locked up the prisoners and, lurking inside an upper cavity, listened to their speeches. Thanks to its shape, the Ear has acoustic characteristics such as to amplify the sounds up to sixteen times, for example if you try to clap your hands, whisper or hint an “a”, the sound booms and is heard throughout the structure.

After being used, probably occasionally, as a prison for the Athenians, this use became typical in the dictatorship of Dionysus, who would have imprisoned the poet Philoxenus there because he was guilty of not having appreciated the tyrant’s literary works very much.

The legendary cave is part of the Neapolis Archaeological Park circuit, which is characterized not only by the splendid ruins of ancient Syracuse, but also by the peculiar latomie, or the stone quarries that were dug by prisoners forced to forced labor, often here even incarcerated: in this aspect the legend of the Ear of Dionysus has its roots in history.